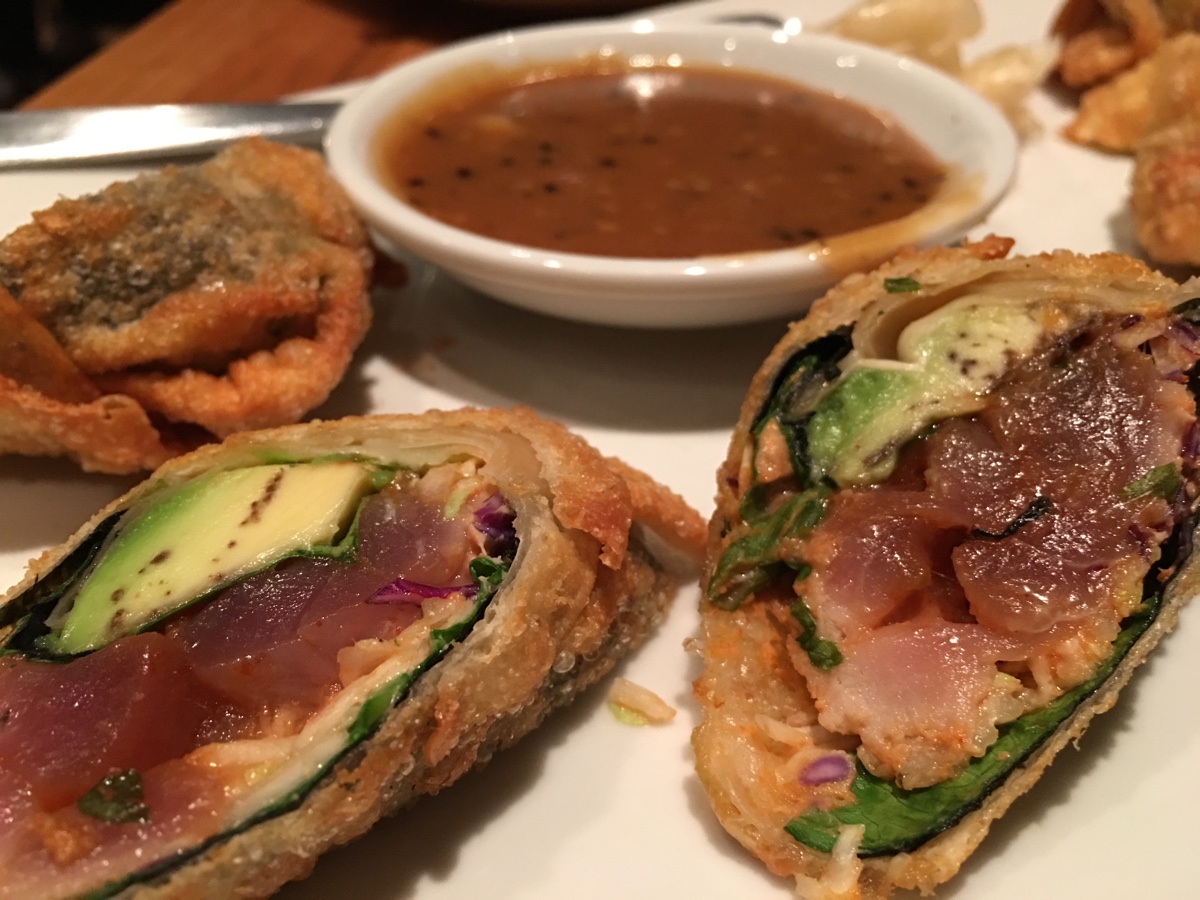 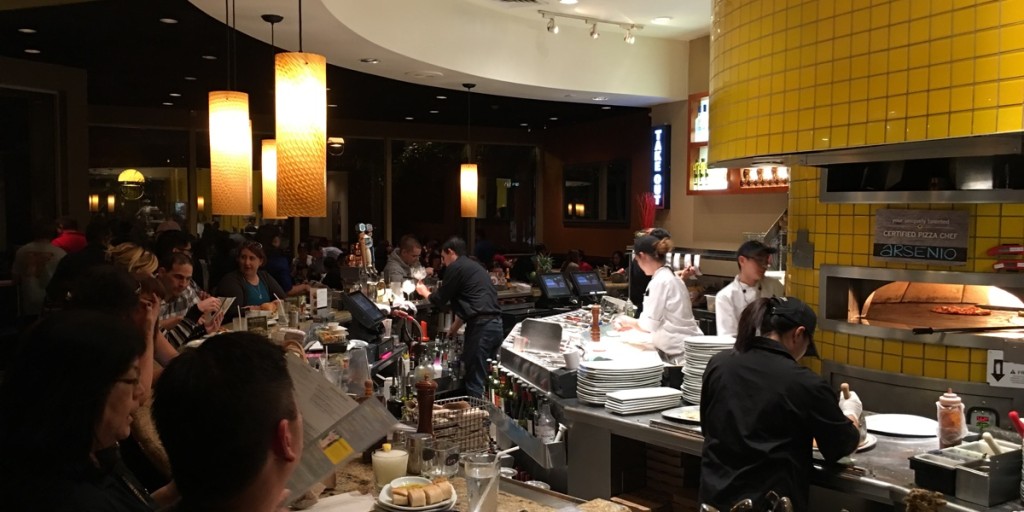 California Pizza Kitchen announced its “Next Chapter” menu in December, which included a number of dishes that were developed especially for Hawaii.Â Karsha Chang connected Hawaii Grinds with Pearlridge location managerÂ Tricia Coloma and skilled server Deirdre to try them last night. 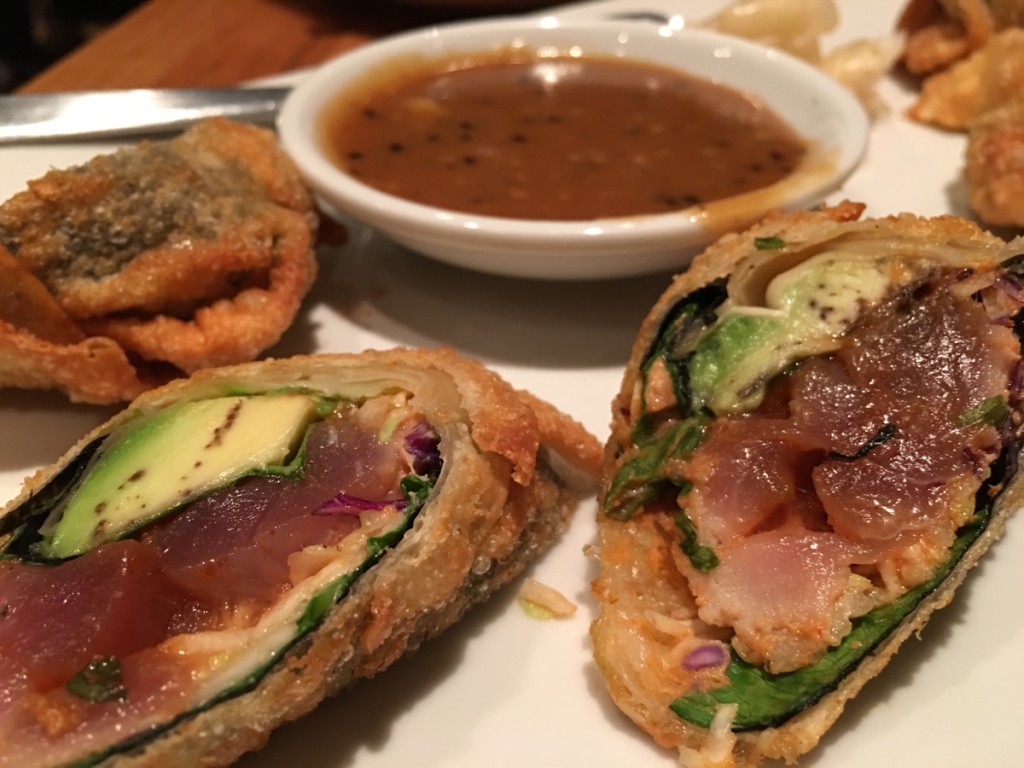 We started with the ahi eggrolls. This was my favorite of the three items. They were still warm but not greasy, crisp on the outside and cool and fresh on the inside. We had the starter size, which was the perfect size to share in addition to the other items.

Ryan adds: The sriracha sauce was definitely the way to go. It was an interesting presentation, the ahi having perhaps the most muted contribution to the overall flavor. 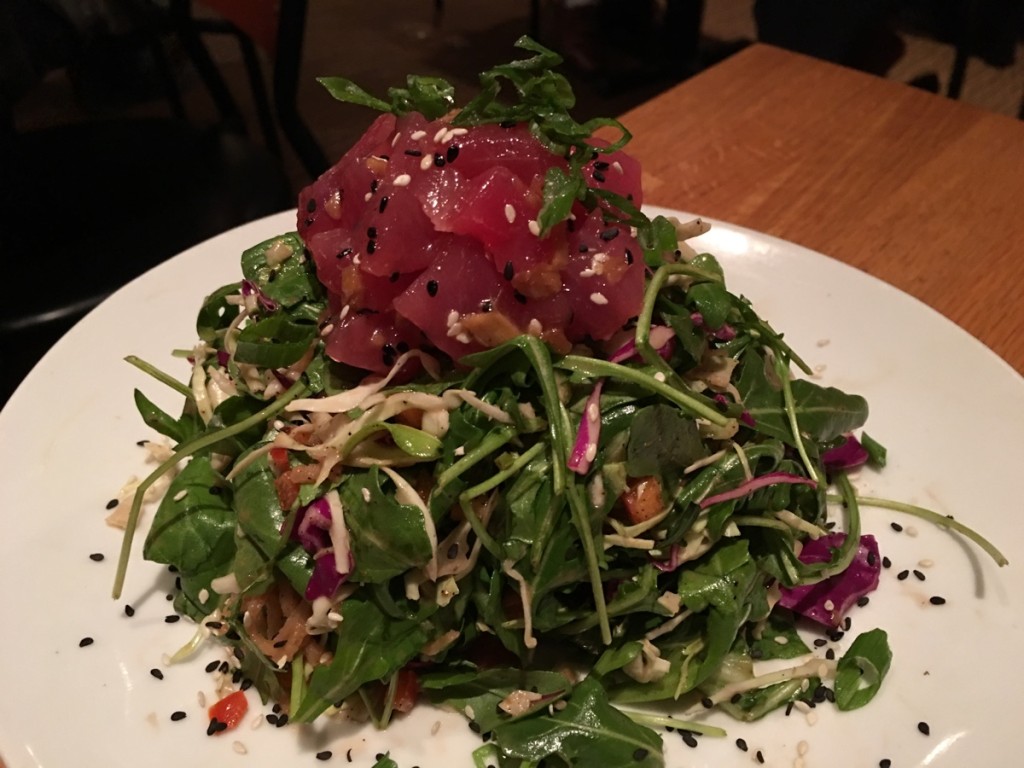 Next we had the Poke Chop Chop salad, opting for the half portion (which was still enough to share). The greens were fresh and had the perfect combination of bitter and fresh flavors. The lionâ€™s share of the greens were made up of arugula, which gave a peppery counterpoint to the sweet dressing.

I always find salads disappointing if they are dominated by one ingredient or have overly large pieces. The salad had neither of these characteristics, but I could complain about the scarcity of the actual poke.Â Then again, you can never have enough poke.

Ryan adds: Considering I’m not a fan of salads, I surprised myself by how much I liked this dish. The arugula brought a lot of bite. 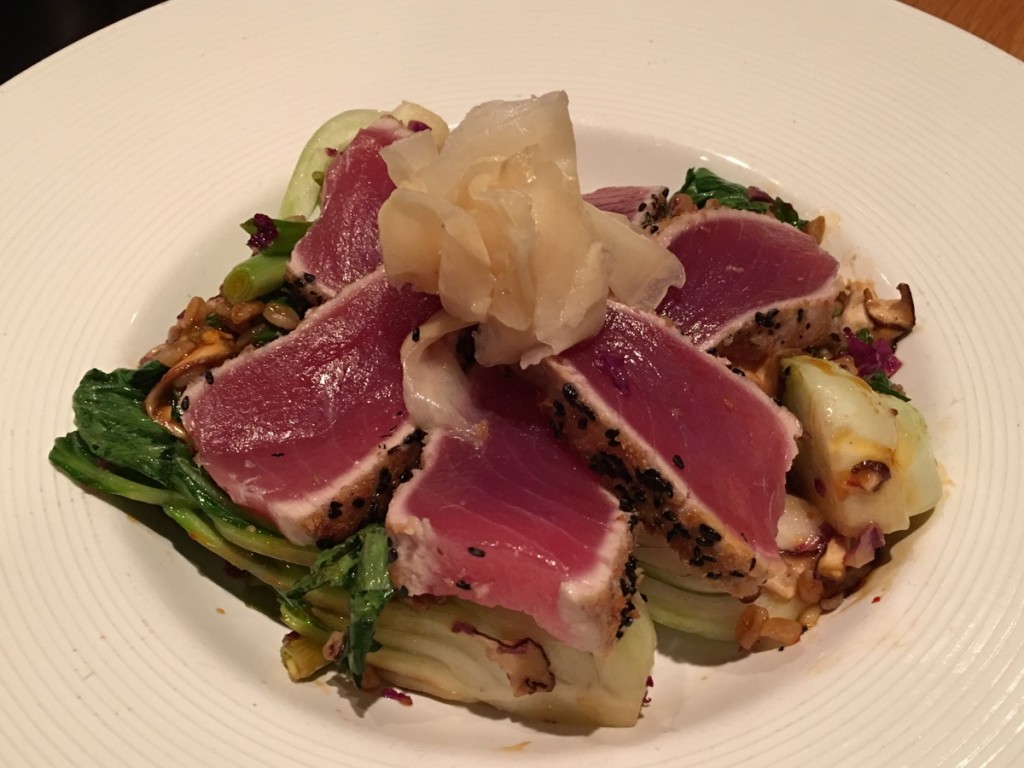 Next, the Seared Ahi. It was served on a bed of bok choy and a grain called faro, which our server said was the new quinoa. While all of the ingredients would have worked for me individually — including the faro which I had never tried before — the combination of the ingredients didnâ€™t quite mesh.

The bok choy was perfectly cooked; neither crunchy or mushy. While I will gladly fight to the death for ahi, I donâ€™t necessarily enjoy it dressed up in a coating of sesame seeds, as it was served here. I think ahi is perfect by itself. It doesnâ€™t need a fancy presentation, or dipping sauces, or any hullabaloo.

Ryan says: This was my favorite dish. If I didn’t know I was eating faro, I could’ve convinced myself it was just a flavorful brown rice. The bok choy was delightful. And c’mon… thick seared ahi steaks? More, please! 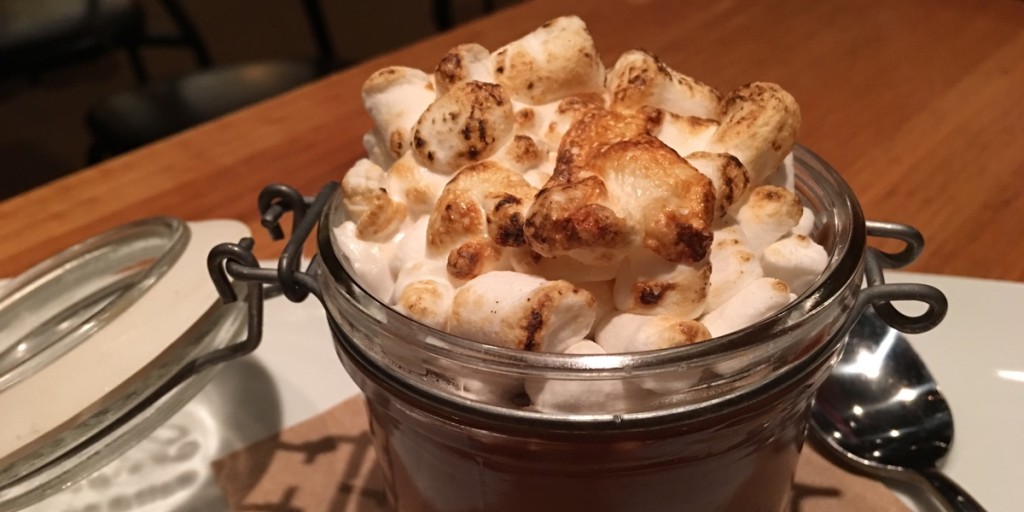 For dessert, we had another new menu item, Sâ€™mores, which — like the sâ€™mores at any trendy restaurant capitalizing on nostalgia — were a hot mess, and not in a good way.

Who ever heard of pudding in sâ€™mores? Everybody knows that there are three ingredients in a sâ€™more: chocolate bar, marshmallow, and graham cracker. The three things together, in proportion with no interference and no messing around, are magical. Adding nonsense like pudding turns it from a sâ€™more into…something else.

If they insist on messing with a classic, they could class it up by using a homemade marshmallow or dark chocolate squares. What we got was a barely-browned hunk oâ€™ sugar-coated store-bought Jet Puffs.

Ryan says: Whoa. Harsh. I never order dessert, and I liked it, at least after I found the graham cracker at the bottom. I think they were trying to go hot and cold with the marshmallows and pudding, but I think they should just serve the whole thing hot. 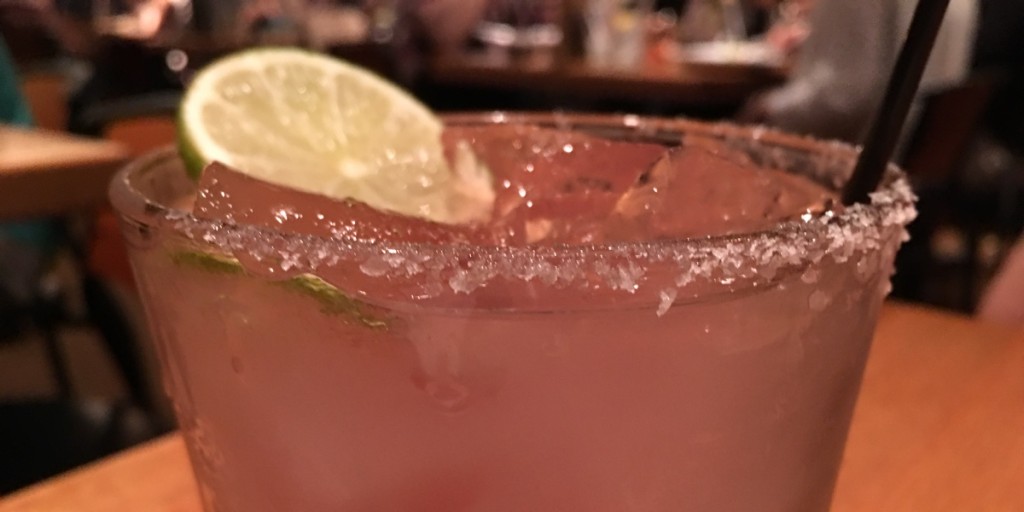 I tried a Platinum Margarita with a Chambord float. I am a bit of a margarita snob and was hesitant to try it sullied by anything but good ol rock salt, but the raspberry flavor of the chambord mellowed out the harshness of the tequila very nicely.

Mahalo to CPK for hosting us for dinner, and to Pulpconnection for the heads up! See more photos here. Read more about CPK’s new menu here.