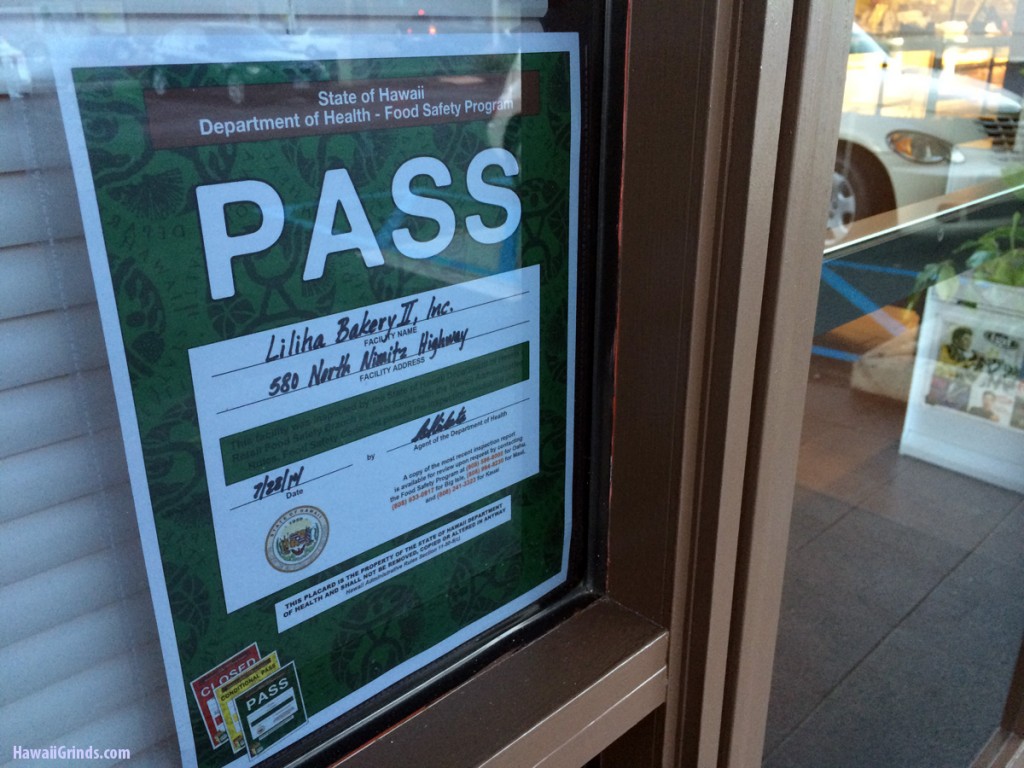 The Hawaii State Department of Health (DOH) is now posting color-coded placards at Oahu restaurants as part of the stateâ€™s new Food Safety Code, signed into law by Gov. Neil Abercrombie earlier this year. The new placards will be posted after each health inspection is completed at every food establishment that holds a DOH permit. The placards indicate whether a food establishment has passed its health inspection, received a conditional pass, or has been closed due to permit suspension.

“Hawaii consumers will have more peace of mind about being protected from foodborne illnesses and other health hazards when theyâ€™re eating out this summer,” said Gary Gill, deputy director of environmental health. “The new food safety rules let consumers know which food establishments have violations and may cause some to think twice about eating at locations where concerns are not being addressed.”

More than 10,000 food establishments statewide prepare or serve food and require a DOH permit to operate their business under the law. There are roughly 6,000 such establishments on Oahu, 1,800 on Hawaii Island, 1,600 on Maui, and 690 on Kauai. This includes restaurants, hotels, caterers, food warehouses, markets, convenience stores, lunch wagons, push carts, and institutional kitchens for healthcare facilities, preschools, elementary schools, adult and child day care centers, and prisons.

“The new law has a built-in incentive for self-policing among food facilities to correct their violations in a timely manner,” said Peter Oshiro, environmental health program manager in the Sanitation, Food and Drug and Vector Control Branch of DOH. “The resulting increased efficiency will free up our inspectors to devote more time to conduct inspections of all of our facilities, and less time on follow-up with the same establishments that do not address their violations in a timely manner.”

The new law follows what has already been occurring in other states across the nation. In anticipation of the rollout of the new law, DOH has been meeting with the boards and members of numerous industry trade associations to keep them fully informed of the pending rule change.

“Food safety and sanitation are high priorities for all of our members,” said Roger Morey, executive director of the Hawaii Restaurant Association, which represents 3,500 locations in the restaurant, food service, hospitality and tourism industries that employ more than 82,000 people statewide. “We believe this new law is good for Hawaii residents and visitors to our Islands, and will help to demonstrate our membersâ€™ commitment to high standards in all aspects of food handling. A green placard represents a seal of approval from the Department of Health, which will further support the business of our members.”

The Hawaii Department of Health will post a color-coded placard after an initial inspection of a food service organization to indicate it compliance status. This placard will be visible to patrons who visit the establishment and to the general public. The law requires these placards to be posted in a display case outside on the outside wall of the establishment, within five feet of the main entry, or in an area readily visible to patrons when they enter the food establishment. The placard must remain in place until a new placard is issued.

Hawaii Department of Health inspectors will typically conduct follow-up inspections within two days to determine if violations have been corrected. Under the new law, there is more incentive for establishments to correct their violations in a timely manner without the need for ongoing monitoring by inspectors. Establishments can receive a green placard if follow-up inspections verify that corrections have been made. A yellow placard functions as a condition use permit. If it is taken down before corrections are made, an establishment could face fines of $1,000 per day.

Increased Efficiency and Funding for DOH

DOH inspectors now spend 60 percent of their time on follow-up inspections. By encouraging self-policing and faster responses to violations, this will free up the inspectors to conduct three regular inspections on high-risk food establishments each year, and significantly reduce the number of follow-up inspections. On Oahu, there are currently 25 DOH inspectors in the field with six more to be hired this summer and fall for a total of 31; eight on Hawaii Island; four on Maui with up to 4 more to be hired this year; and three on Kauai.

“With the growing number of establishments, this new system allows us to be more efficient in conducting inspections,” Oshiro said.

As part of the new law, DOH also revamped its fee structure for permits, effective Feb. 24, 2014. Previously, the average permit fee paid by all food establishments was $46 in three different fee categories. There are now 49 different categories of food establishments and the average fee will be $200. Permit and renewal fees for permanent establishments range from $100 for a mobile hot dog cart to $600 for a hotel main kitchen preparing food for banquets and conventions. The increased permit fees are being used to help fund the additional inspectors and program enhancements such as web-based IT infrastructure and online inspection results.