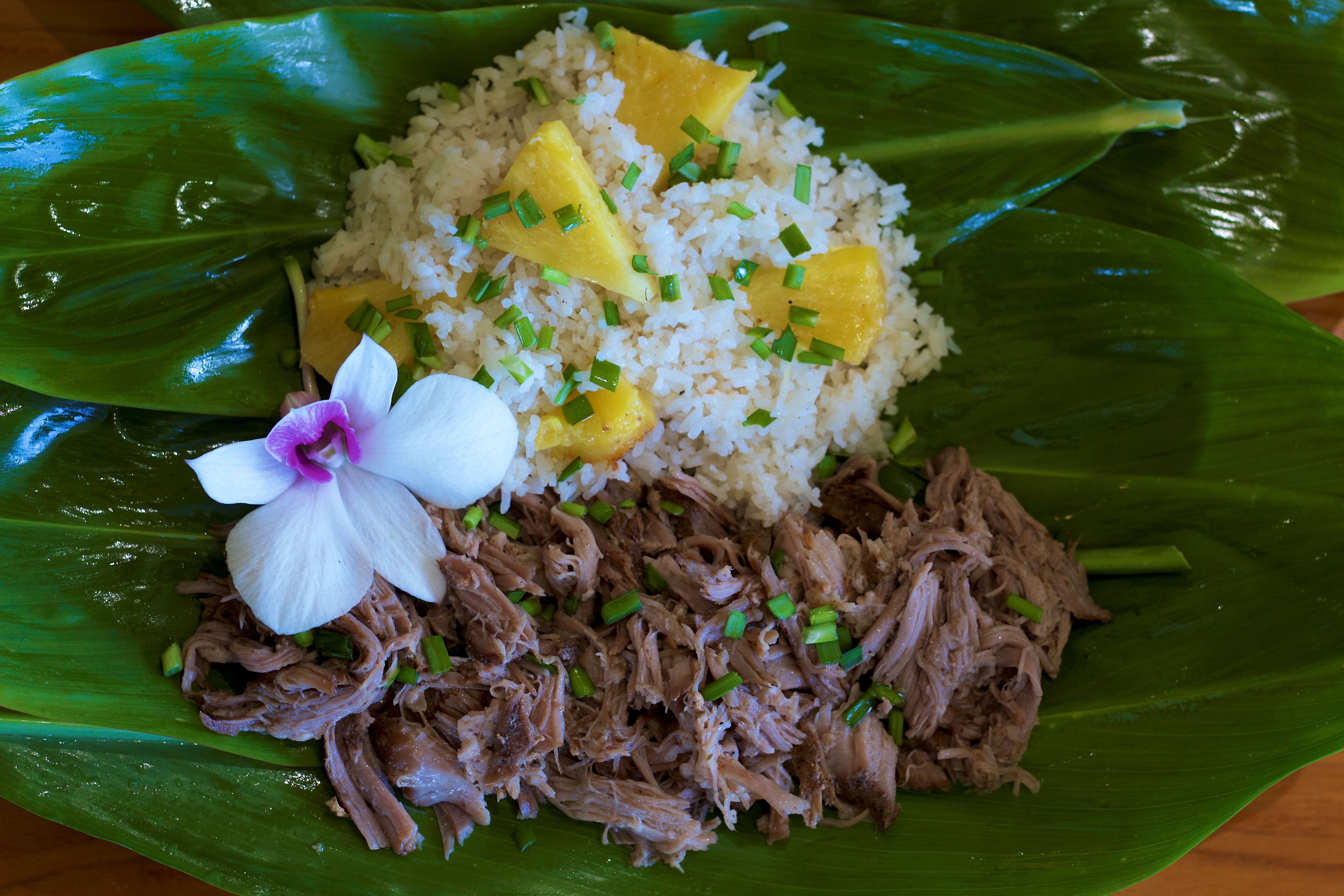 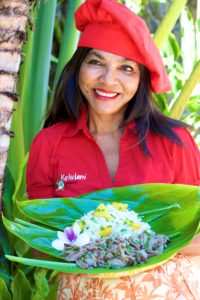 Kai Cowell of Kaiulani Spices has been chosen to represent Hawaii at Flavored Nationâ€™s inaugural event, serving the stateâ€™s iconic plate lunch (with kalua pig and pineapple rice) to thousands of food enthusiasts â€“ alongside chefs and restaurateurs from 49 other states.

Flavored Nation is a new national food experience, kicking off in the Midwest and bringing with it a nationwide selection tastes and talent.

Through extensive research conducted by a team of culinary experts and food entertainment veterans, Flavored Nation has identified the most iconic food from each of the 50 states. Those 50 dishes â€“ as well as the restaurateurs or chefs who prepare them best â€“ will travel to the St. Louisâ€™ Dome at Americaâ€™s Center, October 27-29, giving up to 12,000 attendees the chance to feast on “aÂ taste of every state.”

Plate lunch comes from Hawaiiâ€™s immigrant culture of the 1880s, when plantation workers would make carb heavy lunches from leftovers to sustain them through the long days in the sugar and pineapple fields, Flavored Nation explains. 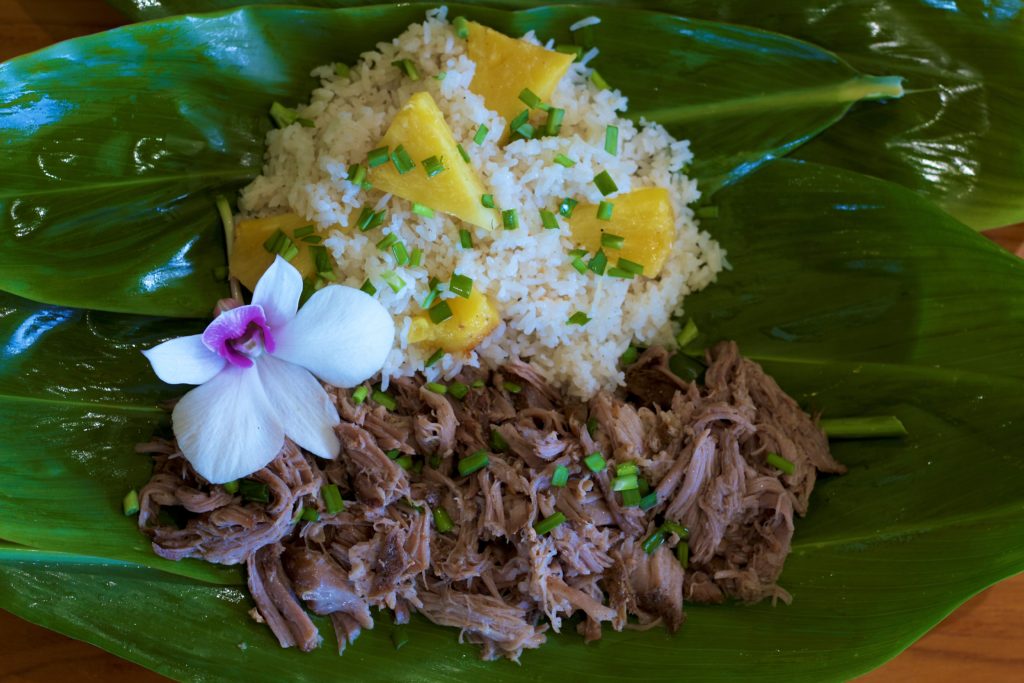 Cowell is originally from the Philippines and has lived in Hawaii since 1976. She was born into a family of cooks, attended culinary school and began creating her own spice blends ten years ago at her home on the side of a hill above Honolulu. Today, Cowellâ€™s spice blends â€“ which she uses in her plate lunch recipe â€“ can be purchased online and in stores throughout Hawaii, as well as tasted in dishes at some of Waikikiâ€™s most popular restaurants. Her first cookbook will come out this fall.

Flavored Nation is spearheaded by its executive producer Richard Gore, who has been developing live culinary entertainment since the mid-1990s (back when food events werenâ€™t a thing). He served as president of live events at Food Network and led the development of â€œFood Network Liveâ€ and â€œFood Universityâ„¢ at Caesars Palace,â€ in addition to creating â€œeat-ertainmentâ€ marketing campaigns for brands like Heinz, P&G, Unilever, Ikea and Family Circle.

At Goreâ€™s side are fellow food entertainment veterans, David Rosengarten, Jared Bobkin and Bobby Parrish. Rosengarten is a two-time James Beard award winning food writer and was one of the first on-air talents at Food Network. He hosted â€œFood News & Viewsâ€ then created and hosted the program â€œTaste,â€ which ran for eight years. Heâ€™s now Flavored Nationâ€™s head of content. Bobkin is a Detroit-area executive chef who made it to the final rounds of FOXâ€™s â€œHellâ€™s Kitchenâ€ season 15. Heâ€™s also Flavored Nationâ€™s culinary director, conducting nationwide research with Rosengarten to determine the United Statesâ€™ iconic foods and top eateries. Parrish, a Chicago native, is a home cook whose online brand FlavCity has a social following of more than 400K. He appeared on Food Networkâ€™s â€œCutthroat Kitchenâ€ in 2006 and is now the friendly face of Flavored Nationâ€™s online video series.

â€œAmerica is incredibly passionate about food, which has moved from our plates to our screens and become a core part of todayâ€™s pop cultureâ€ said Gore. â€œFor cooks and non-cooks alike, how we speak about food today is not how we talked about it 15 years ago. Food is reviewed, read about and watched on TV; and our social lives often revolve around eating. However, in a nation of documented culinary diversity, most peopleâ€™s personal food experience is still limited to local geography and some occasional travel. Itâ€™s why a Chicagoan can argue extensively about the cityâ€™s best deep dish but has never tried chislic or huddishâ€¦ the iconic foods of South Dakota and Minnesota, respectively. This is the perfect time for Flavored Nation. We want to fuel debate about local favorites and at the same time spur discovery people crave, providing access to 49 other state dishes that, for most, will be brand new.â€

The vendors who will be in attendance include chefs and restaurateurs almost as iconic as the state dishes theyâ€™ll represent.

â€œNo one wrote a guidebook on how to authentically identify the United Statesâ€™ most iconic foods,â€ said Rosengarten. â€œItâ€™s been an amazing adventure and challenge. Some states, like Louisiana, California and New York, are well known for multiple dishes. For other states, like South Dakota, Minnesota and Nebraska, I personally drew a blank. Through exhaustive research, consumer input via social media and conversations with state tourism boards, weâ€™ve mapped it out. Now, weâ€™re stacking our roster. Restaurants and chefs canâ€™t buy their way in. This is invite only, and weâ€™ll be bringing the best of the best for an unrivaled culinary experience this fall at Flavored Nation.â€