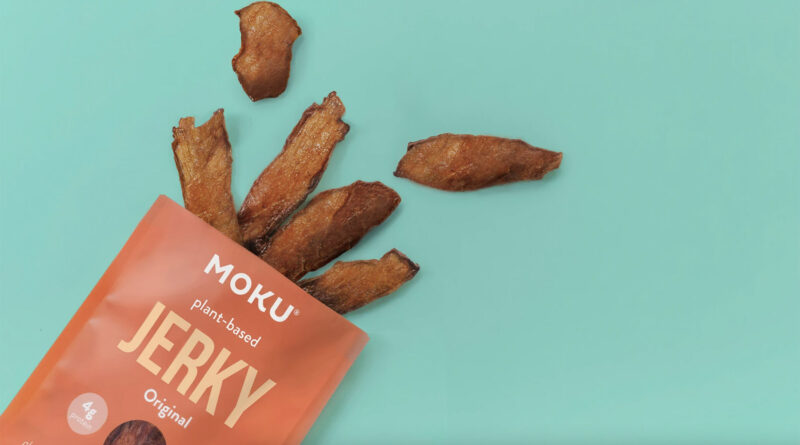 A Punahou School graduate and native Hawaiian entrepreneur has launched Moku, a plant-based snack designed to appeal to both carnivores and vegans alike. The savory jerky snack is based on mushrooms but promises the taste and texture of meat, with a clean, allergen-free ingredient list.

â€œRaised on Oahu, an island with limited natural resources, I understood the importance of caring for the land or, malama â€˜aina as we say in Hawaiian,â€ says 29-year-old Moku founder Matt Feldman. â€œAs I became older, I learned more about the immense carbon footprint caused by industrial factory farming, which led me to adopt a plant-based diet.

“I struggled to find an alternative to replace jerky, my go-to snack, that wasnâ€™t filled with ingredients that sounded like they were made in a lab,” he adds. “So, I set out to create my own.â€

After a year of development in his home kitchen, and partnering with renowned plant-based chef Thomas Bowman, Moku was born. With ingredients includingÂ king oyster mushrooms, coconut aminos, chickpea miso and maple syrup, Moku’s jerky is plant-based snack that tastes as good as it makes you feel.

Growing up in Hawaii, Feldman was raised with an appreciation for nature and a lifelong commitment to preserving the environment. At an early age, he learned of the immense carbon footprint of the meat industry, which led him to gravitate towards plant-based foods and sustainable food sources.

As he became older, Feldman also began to hone his entrepreneurial side, co-founding his first business venture with his older sister, Melanie, in 2011: Bookzingo, an online marketplace for college students to buy and sell textbooks.

In 2015, Feldman took first place in the Institutional Investorâ€™s Third Annual Student Analyst Competition beating out 2,000 students from 74 national universities. In the competition, each student is given $100,000 in virtual cash to create an investment portfolio. Feldman’s success at the event demonstrated his uncanny ability to manage risk, and understand the market and investing.

After graduating from Baruch University, Feldman began his career at Bloomreach, a leading technology company in Commerce Experience, where he learned the inâ€™s and outâ€™s of growing an online business.

The Inspiration for Moku

In 2018 Feldman transitioned to a vegan lifestyle and began looking for a replacement for his go-to snack: beef jerky. He was inspired to create his own after struggling to find a minimally-processed, allergen-free alternative at the grocery store.

He teamed up with renowned culinary experts Thomas Bowman and Ali Bouzari to develop a jerky alternative that would emulate the taste and texture of meat while remaining healthy for consumers and the planet. After more than a year in development, Moku was finally born.

Mokuâ€™s impact is also far-reaching for the environmentally-conscious. Replacing a bag of jerky with a bag of Moku, Feldman says, saves up to 12 square feet of land, 11 pounds of methane and 107 gallons of water.

â€œWe’re not here just to make jerky. We’re here to encourage everyone to take mindful steps towards a healthier, sustainable future – from our snack choices to our day-to-day routines,â€ says Feldman. â€œMoku makes it easy to incorporate more plant-based foods into your diet; and small changes add up. Letâ€™s take it one day at a time, one choice at a time.â€

Free of the top-eight allergens and with minimal processing, the mushroom-based Moku caught the attention of wellness industry heavyweights, including Nick Green, co-founder and CEO of Thrive Market, Neil Parikh, Casper co-founder and COO, Ellen Chen, Mendocino Farms co-founder, and the founders of Soylent and Juneshine.

In 2020, Moku earned a coveted spot in Amazonâ€™s invitation-only â€‹Emerging Brands Program, and Feldman was listed on Forbes â€‹30 Under 30â€‹.

Moku is now available online at mokufoods.com in three distinct flavor options: Original, Hawaiian Teriyaki and Sweet & Spicy. The products will also be available for purchase on Amazon Prime in January 2021.